Grey Knights - A Dance of Death

Having finished the Land Raider I have jumped straight into the passengers that are intented for it, a unit of Death Cult Assassins and Crusaders.

I have wanted to this this unit for some time, having got all the bits together over the last 6 months I was originally going to use the Dark Eldar Wytches as a base however with the release of the new Dark Elf Witches I immediately changed plans.....the new Dark Elf Witches are just gorgeous and with only minimal conversion make perfect Death Cult Assassins.

The bits used to make the Death Cultists are, Dark Elf Witches, weapons and face masks from the Dark Eldar Wytches, axes from Empire Great Swords, ][ etched brass from FW and skulls from whereever you want. 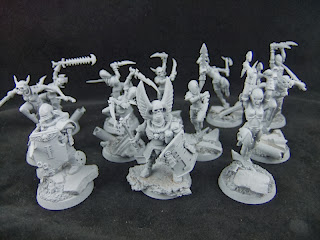 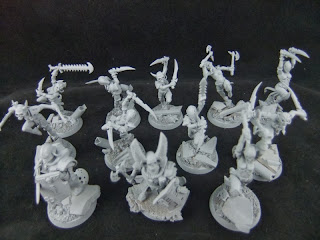