A Weekend in the Jungle

This weekend I had the great pleasure of a trip to the Jungle to get in amoungst the great apes much like Dian Fossey.  Although not in the mountains of Rwanda but rather strange place to find a jungle, the Netherlands.......and bloody hell it was cold.

I had the great privilage to go to attend the Massive Voodoo Workshop in Sprang-Capelle, Netherlands, run by Roman Lappat and assisted by Peter Toth (a very talented painter in his own right) this weekend.

I have not been painting for a great deal of time and I am self taught, and one of the people that has inspired me to paint and been a driving force behind it is Roman, (another is my friend Peter Bell, but thats another story entirely) he has unknowingly passed on a want to experiment.  Without the inspiration of the Massive Voodoo guys I most likely would never have attempted my Nurgle Giant and done so well.

The class was the beginners class; although I am not really a beginner, there was plenty to learn.

The class was a perfect mix of theory and practical with an emphasis on freedom of choice which I found very refreshing, Roman did not simply sit there and give a demo and then say right repeat this using these colours, instead he demostrated a technique and then allowed the class to make their own decisions based on the theory learnt earlier; such as colour theory, contrast etc.  This meant that there were not just a room full of drones tending to the needs of some sort of Queen Bee but instead everyone was made to think for themselves; of course Roman and Peter were on hand to help. 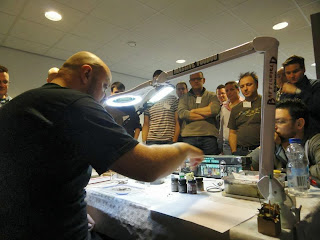 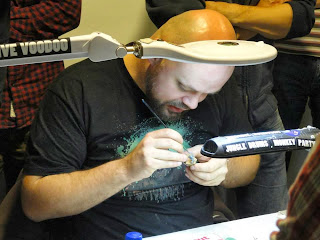 I was lucky in that I have over the last couple of years got to know a couple of wonderful chaps, Pascal from Holland and Gert from Belgium (although I think he might be from Asgard........) 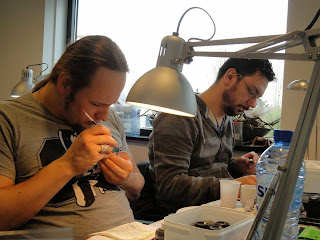 I have to thank both of these guys from the bottom of my heart. Gert firstly for giving me the heads up about the course in the first place and organizing it and Pascal for allowng me into his home as a guest and treating me like family for the entire long weekend I arrived in the Netherlands on Thursday and left on the Monday, enough exposure to the Dee for any sane person to become mentally deranged but luckily Pascal is already Herping and Derping mad 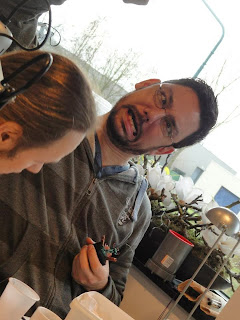 I was also joined by my good friend Phill who I have to thank for the most of these pictures. 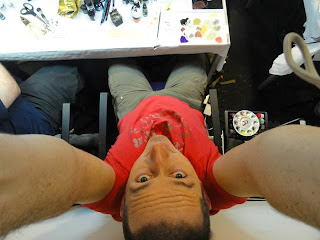 We started at 5:30pm on the Friday and started by building our Daemonette then onto some theory regarding environments to help develop ideas about the base.  Once completed Roman started to demo some base building techniques then we were sent off to build our using the vast array of materials that Roman had brought with him.  I personally tried to mirror the movement of the daemonette in the base and effectively frame her (him??) with the cross in the background 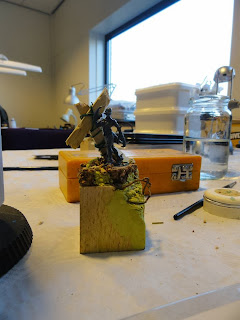 Day 2 started at 9:30-10:30am and began with a short presentation on colour theory and contrast.  Then we got straight into the "paint scetching" Roman showed how he scetches the base using wet one wet blending to give a rough layout of shade and highlight etc.  This was a bloody revalation to me, if I learnt nothing else from this moment forth I would have been happy :)  We then did it ourselves.  I have to say that I was extremely impressed with this technique for bases and I shall be using it in the future all the time without fail.  Rest of the day we gradually increased details on the base etc with frequent demos from Roman at which point he also requested to see everyone's bases so to assess each individual's progress.  Then on to the Daemonette. We were given presentations on inspiration for the daemonette colours.  The on to painting her...once again Roman gave frequent demos and walked us through the basecoating and then the shading and highlighting some of which was a matter of going through the motions for me but even i managed to learn here certain things about how far to take a model contrast wise at certain stages.  By the end of Day two everything had started to take shape....I think we finished at about 1am?? I think :)

Day 3 consisted of more of the same however without much in the way of presentations, this day was mostly painting with demos at specific stages by Roman, increasing details etc

For me again I learnt a timetable of painting that made a great deal of sense to me, but best thing i learn by far was painting eye balls with cocktail sticks....again a revelation to me which just makes sense to me to the point I don't know how the hell I did without it all this time.

Very happy with the final result. 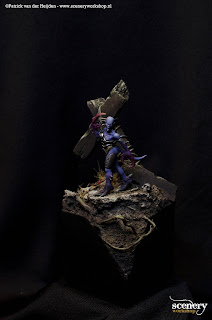 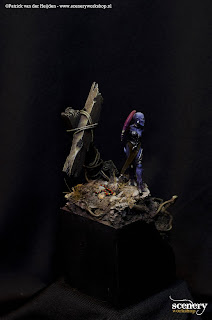 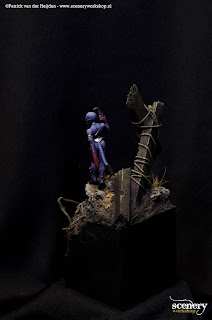 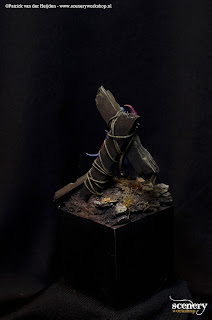 In conclusionthe course had a great relaxed atmosphere and you actually left feeling that you had both improved and acheived something....full of win in my opinion. 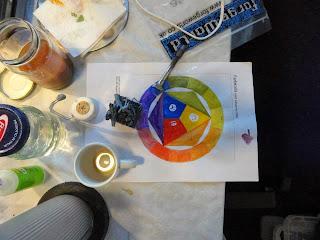 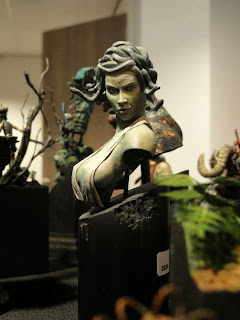 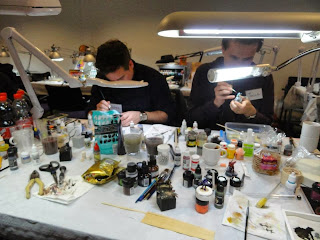 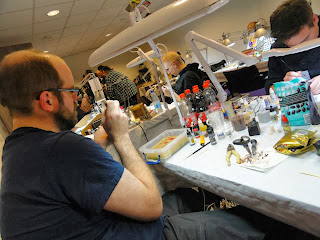 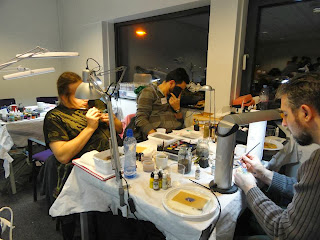 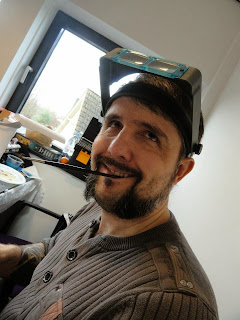 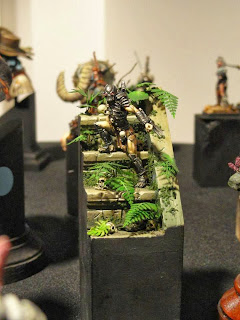 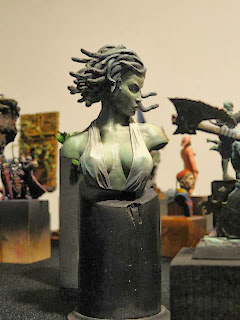 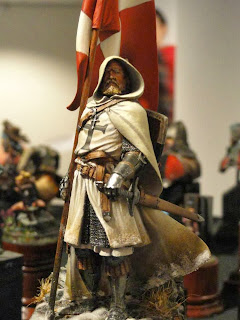 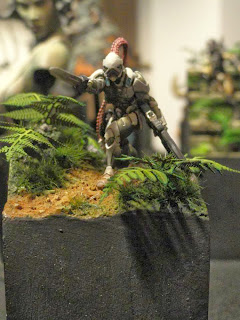 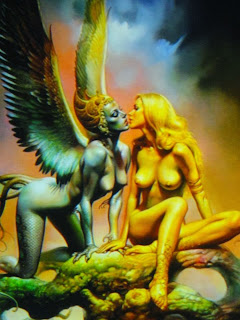 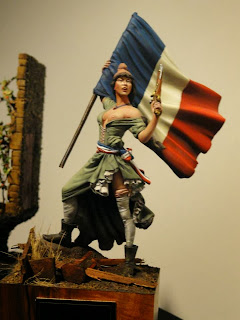 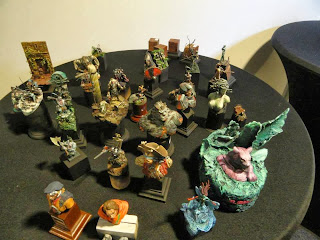 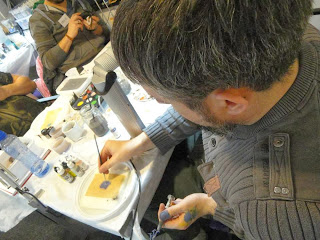 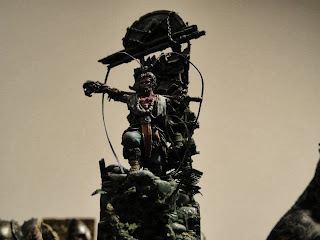 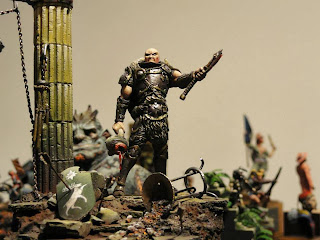 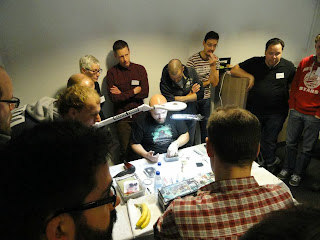 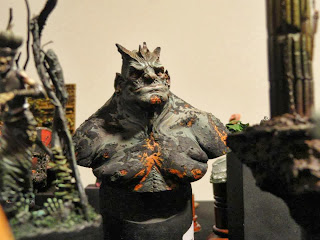 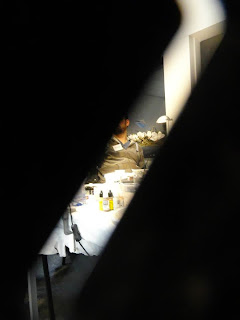 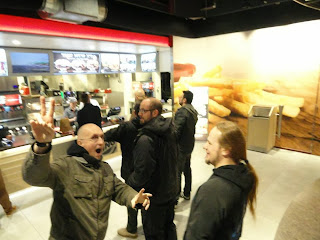 Roman in radiates a happiness that is infectious.  It is refreshing as i spend most of the week surrounded by lying solicitors and bastard estate agents......... As a buddhist myself I can see the amazing positive affect it has on everyone around him and that can only be a good thing.

I had the great privilage to spend a very small amount of social time with Roman and Peter after the course and speak to them both, both are very nice guys that seem genuinely happy that you are there with them.

I have come away from this weekend inspired and full of joy, a feeling that has no price tag.

and thank you to all the new friends I have made this weekend.