This weekend has been rather productive.  Although I forgot to take much in the way of bloody photos, I enter a zen like state of painting and forget to do stuff so I will sort some out tonight.

Anyway I managed to get the following stuff done:

1. All the pistons, including all the toe, hip, shin and thigh pistons, there are so many but they are done and I am happy :D

2. Planned out the colours for the armour plates.

3. Got the red gradient done on all the armour plates that will be red, namely the toes, lower piston guards, gun armour and knee pads.

4. Started the paint bonewhite armour, including the checks on the red knee pad, and the head. 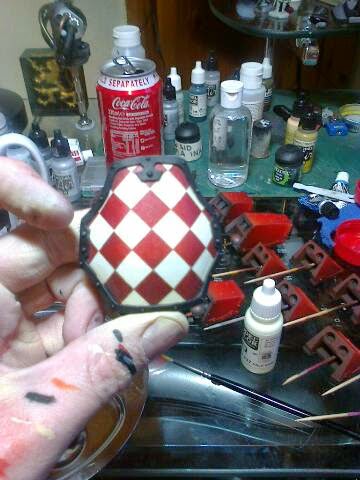 Strawberries and cream anyone?
5. Painted the endoskeleton for the head and the pipes on it.  Araldited the tubes in.

I am considering doing the same red and bonewhite check pattern on both shoulder plates as well because it looks rather striking I though.

I feel there is serious progress being made and I am liking it :D
Posted by Mrdee at Monday, May 12, 2014